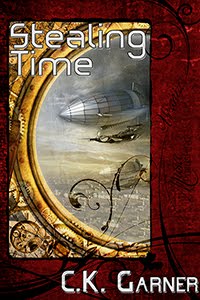 Time is tested when a sky-captain risks his life in a desperate move to keep secrets from sky-pirates; but a young boy proves worthy of the sacrifice, finishing the fight his father began.

What is it about?

Stealing Time is a short steampunk novella; a perfect quick read for your Kindle!  The tale is set in fictional San Atenai Bay, recalling old San Francisco, but with a dark steampunk twist. Airships sail the sky over ships of the sea, railroads haven’t yet joined across the states, and time travel exploration is in its infancy. Stealing Time is an alternate history, nineteenth-century, maritime Western adventure.

From the Cover: While testing time travel pods, Skyship Captain Acastus-Hale Atenai and Dr. Nikola Tesla fall under attack from coastal raiders called Phantoms trying to capture the technology. In a desperate move to keep the secret safe, Captain Atenai launches Dr. Tesla mid-battle in a time-pod. A few years later it is up to Captain Atenai’s son, Acastu, to take up where his father left off. The secrets of time travel must not fall into the wrong hands. Can Acastu prove himself worthy of his father’s sacrifice? Only time will tell.

Jim, realizing that Tia Rosa had all the help she needed, shrugged Ligys off his back and thrust her at Acastu. “Here, take her, I’ll clear the way.”

No longer playing the friendly charmer, he plunged forward, years of street skills coming to the fore as the trio ran. He threw an elbow into the face of the nearest Pressman, who swore and threw up a protective hand against further attack as it connected with his magnifying-glass eye, a gruesome legacy of a lifetime amongst the Phantom fleet, who regularly altered their staff and crew like so many laboratory test subjects.

The pain, however, kept the recruiter’s grasping hands off his young friends, giving Jim time to knock the next one flat with a straight punch to the chin. Acastu, heart racing in fear, leaped over the body as it fell, his hand tight around Ligys’ small one to pull her along. They fled with the other urchins, moving to take any bit of space Jim created to shove forward, listening to grunts and foul language as Jim cut a path through the snarled humanity on once-organized wharfs. They plowed on, but even with his friend’s help, Acastu felt the frenzied crowd pulling his sister away from him in another direction. Desperate, he hung onto her, but soon was a good distance from their champion.

Acastu was scared; this was the largest run of Pressmen he’d ever seen, and nearly all of them sporting facial alterations, hideous gas masks, giant convex lenses replacing an eye, mysterious shoulder apparatus, some set with what looked to him like harpoons.

“Jim!” he shouted. “Jim! We’re over here!” But his words were lost in the melee.

He only saw a glimpse of Jim once more; the Champion of San Atenai, teeth locked tight in a grimace, fighting a futile match against a group of Pressmen….

Get STEALING TIME the new E-Book by C.K. GARNER at the following locations:

SPECIAL THANKS GO TO EVERYONE WHO HELPED MAKE STEALING TIME  A REALITY and TO MY WONDERFUL READERS! 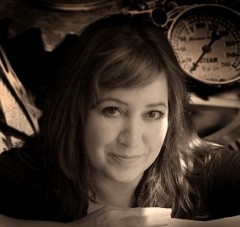 About the Author:  C.K. Garner is currently at work on the sequel to Stealing Time and a Victorian murder mystery. A YA fantasy novel is scheduled for release in 2013. In her spare time she also writes as The Widow Kate Next on The Steampunk Empire, where she takes blame for the creation of a darkly amusing social circle entitled “Just a Bit of Arsenic”.